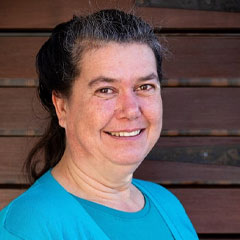 Nicky has been Administration Support Officer since October 2013. She used to work at the Motor Tax (don’t hold it against her) and now works at La Nouvelle Maritaine supporting tenants. Nicky has been secretary to the Mental Health Service Users Group since its start in 2007.

Nicky is an avid reader and knitter. Now her son has a motorbike she has hung up her “mum’s taxi” keys, though he still lets her take him to play matches for Vale Rec.